In the studio of Lekha Washington

Off a noisy road, in a quiet bylane of suburban Mumbai, Lekha Washington’s studio with its minimal yet warm décor makes you want to get to work everyday

As with most renters in Mumbai, Lekha too went through the grind of checking out some not so great options. After about a two month-long search, she was about to sign the lease for another place when she ran into the lovely, feisty Maria Fernandez. “She mentioned that her friend, Herman Rodruigez had a lovely space that he had locked up for several years but was perhaps unwilling to give out, yet would show me anyway. The moment I looked at the space I was in love. The high roof was fantastic, it was the one thing I was desperately looking for,” lets in Lekha on how she discovered this gem of a place.

The space was locked up for a long time and hence was in shambles. Divided into rooms, the termites had made it their home. With chunks of the roof missing, lack of water or electricity, and a floor that was completely eaten into, it was going to be a long, hard, slow, and not to mention, an expensive restoration. “Keeping all the original details intact while still giving it an edge, we began from a certain innocence or naivety and once we started, we just couldn't stop,” says Lekha.

A free flowing space, the studio is devoid of any walls or cubicles or workstations. “I am instinctively averse to traditional desk seating because the very essence of this space is to allow oneself to be comfortable functioning outside of the box. This space becomes several different things - a gallery-esque space to showcase work, an idea lab, accommodating corners for privacy to have meetings, and as a space to have cultural events such as poetry readings,” explains Lekha. Currently, her team comprises of eight people and a black and white cat, who walks in at will, and mostly naps through his eight-hour work-day.

With no fixed worktable in the traditional sense of the word, work here at the studio also follows no fixed pattern. There is no set pattern to how the team works on the projects; it is more dependent on what one is doing on that particular day. When we visited the studio, the team was busy putting together a light fitting that looked equal parts art and design.

At the far end, three flights down is a cosy room that doubles up as Lekha’s creative corner. “I don't have a desk really, though there is a low table near my favourite couch. On which there is a mess, surely. And pens that don't work, and colour pencils that do. Sometimes, if I'm lucky, there'll be flowers from my favourite cousin, Amit,” smiles Lekha as she hops down another wooden staircase out from the pantry into the garden to make that call that she had long put on hold. Similar to the Drop chair, a part of this chair is created by Lekha Washington and decorated with mini chairs by Jean Francois. In the background, is a sculpture made with paper planes. A view of the studio, with the team in the background working on a new piece.

A corner of the studio where miniature models among others are experimented with. Lekha’s desk, in her own words, “has pens that don't work, and colour pencils that do. Sometimes, if I'm lucky, there'll be flowers from my favourite cousin, Amit.”

Lekha Washington seated on the Dot designed by her as a part of the Sink collection, which seeks inspiration from the bindi. A stone sculpture sits next to an antique table fan on the window ledge in the makeshift meeting room.

The quirky corner that serves as a board for their in-house experiments with design.

A view of the entire studio from Lekha’s creative corner. 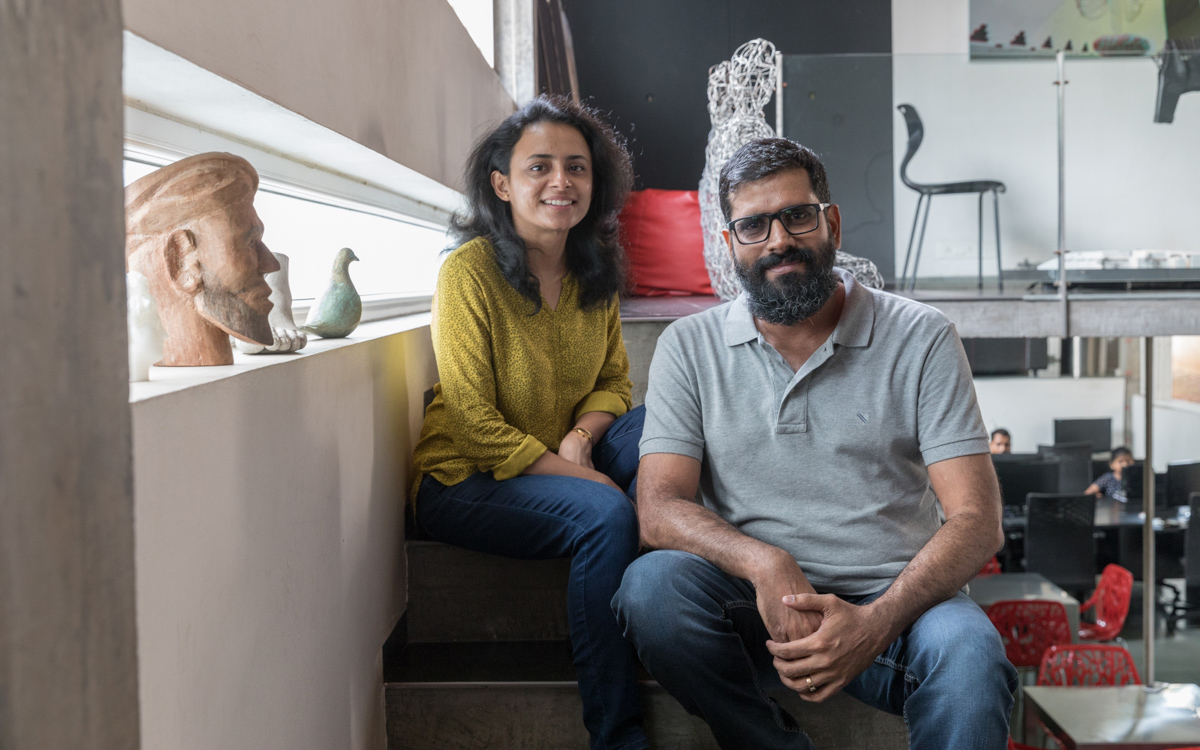 In the studio of LIJO.RENY.architects

In the studio of Studio Wood

In the studio of Google London

In the studio of Katrin Baath

Take a tour of this minimalist haven in Sweden