Interior designers, when they deeply consider their style, it makes sense that their projects develop a particular character. With New Delhi-based interior designer Shivani Dogra, this means rooms without artifice, spaces that don’t try to impress you with fancy accessories but like great raconteurs, experience also makes places charming. She creates today the sort of rooms that once existed, rooms with culture, provenance, great storytelling rooms. Rooms with books, where textiles remember the people they came from, where artefacts represented reason than just beauty.

Shivani’s portfolio feels like looking through a family album, each a picture of a different strand of a single design clan. Shivani, 40, found her calling in interior design after stints in film production, and lastly as a producer with the South Asia bureau of American radio network, National Public Radio (NPR). “I loved my job, but I felt I wasn’t being put to use, like I hadn’t found my calling. I spent my spare moments at NPR browsing adult career tests; what to do if you wanted to switch careers as an adult, and every test, the MAPP test was one, pointed to restoration, conservation, older buildings, and interior design. I think I’d known it all along, but I didn’t have clarity to see this is what I should be doing. I guess I was also afraid,” she remembers. Her first project was a studio/ flat for herself, a small space at the end of her aunt’s driveway in the Shanti Niketan area. On a budget of Rs. 20,000 she transformed it in her inimitable style, took before/after pictures, sent those to a magazine, got a raving review from the editor, who also published her first project. From there on clients have come, and projects—spread around the country—have gotten bigger, but each one is stamped with her unique languorous design quality.

NEW FRIENDS COLONY
This is the story of one of her projects. Four years ago, Shivani was contacted by Anasuya Sanyal and Newley Purnell. They were journalists who moved to Delhi when Newley was appointed foreign correspondent for the Wall Street Journal. (The couple moved from India to Hong Kong earlier this year, so this home no longer exists. Newley has recently been in the news for his The flat’s palette of colours was chosen to complement the Nilaya wallpaper in the entryway. Anasuya’s main direction to Shivani Dogra was to incorporate a bit of Bengali-ness into the decor.

report in the WSJ on Facebook’s India operations.) For this design project, Anasuya was Shivani’s collaborator-in-chief. She’d discovered Shivani’s work on a décor blog and wanted her help decorating their new home in the city’s New Friends Colony, New Delhi. Now, New Friends Colony is a typical New Delhi suburb. Full of small restaurants, a busy market, and large bungalows that stand on plots that were once promoted for the views of the Yamuna river. Sadly, there are no views of the river anymore.

Anasuya and Newley had found a home in the annexe of a bungalow; their space was accessed via a garden in the front, leading to a flat with a ground-floor, plus two storeys for the bedrooms. It was charming, if oddly segregated. “Rarely do you have clients who inspire you and are like muses. I find that in many of my older clients, there’s a lot to learn from, Anasuya was one of my younger clients, but I was so impressed by her personal sense of style and I appreciated it so much,” says Shivani. “Anasuya is Bengali by birth and loved the older Calcuttan style. Her favourite designer was Sabyasachi Mukherjee; in fact, she wore a Sabya dress for their wedding.” So, Anasuya’s direction to Shivani was incorporate Calcutta or Bengali-ness into the design of the space. The furniture in the bedroom are all mismatched because each piece was purchased separately and brought together. The Indian-print wallpaper by iconic fashion designer Sabyasachi Mukherjee for Nilaya, by Asian Paints, set the tone for the decor in the rest of the house. The only furniture in this entryway is an old church pew. The niches in the wall were painted white and dressed with framed botanical prints.

DONE, JUST RIGHT
Sometimes interior designer-created homes end up overdone and garishly made-up, victims of spatial Manchusean syndrome, where someone keeps doing plastic surgery to look better, but the opposite happens. But not in this couple’s home. When Shivani began the project, the home was oddly painted and a mix of this and that. The final result of this design project is a beautifully underdone home. The right number of pieces added with the lightest feather-touch to make the space better than it was. The starting point of the décor, following Anasuya’s initial direction, was an Indian-print wallpaper designed by Sabyasachi for Nilaya, the wallpaper collection by Asian Paints; this print was placed in the entryway of the home. “We chose this wallpaper because it was lovely, it was designed by a Bengali, and it set the tone for the space based on the colours in this entryway, a dull blue and the mustard on the floor.” The entryway’s only piece of furniture is a gentle old church pew. 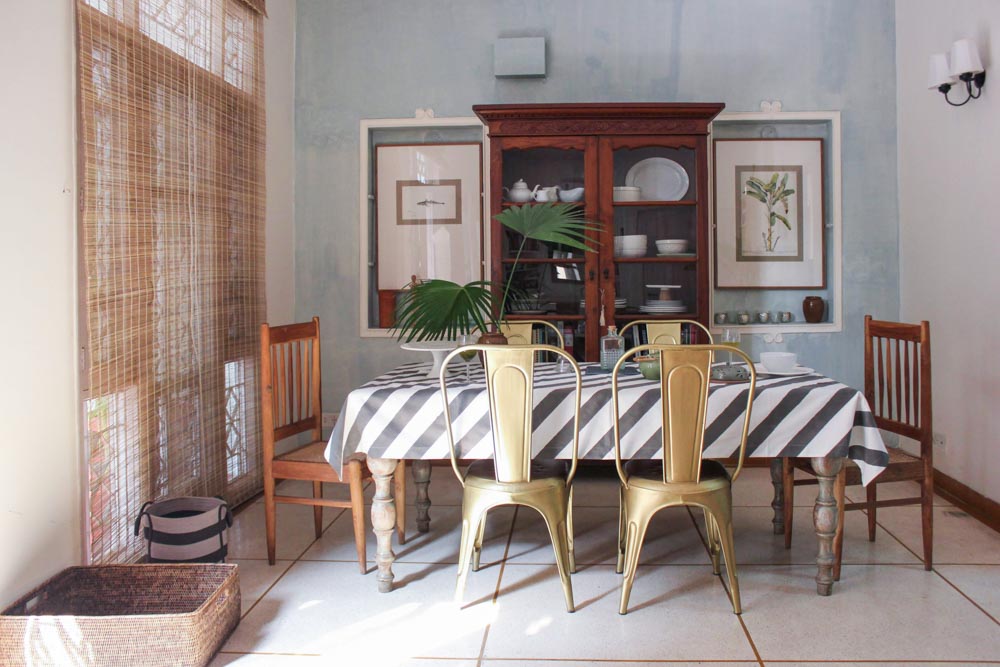 The large cabinet is an old teak piece from Calcutta. The blue colour on the wall was distressed to give it a worn-out look. The dining table and chairs were bought from Sharma Farms.

The ground floor of the home was also its public spaces, a living and dining room. One end of it had the original cream colour of the walls, while the dining area at the other end, was a character of its own. A blue that was purposefully distressed, sat with two niches that have been used for framed prints, standing guard beside a wizened old teak-and-glass cupboard from Calcutta, with white cutlery inside. “She had beautiful handmade ware, and lovely white bakeware. We didn’t style it so it would look pretty; the cabinet simply has things that she already had, so it came together naturally.” The furniture in this reception room is a collection of textures and complementary colours, mixed together to form a rustic elegant space. If there was such a thing as barn-house chic in our country, this would be it.

DÉCOR, SANS PLAN
The pieces were bought from here and there around Delhi. Shivani says Anasuya and her scouted for pieces, going from one end of the city, to vintage markets, scrap stores and décor haunts, in her old beat-up Ambassador. It was the perfect vehicle for such an endeavour. The textiles were found in Lajpat Nagar, a no-frills textile haven, furniture came from various spots including the Delhi’s favourite old furniture haunt, Sharma Farms. New purchases were mixed in with pieces the couple have held on to for emotional reasons, like a striped blue-and-white armchair from Ikea. The bedroom is an arresting salmon-pink colour, with an ironwork bed from Original Bedstead, an export brand, and a pair of side-tables from an old farmhouse. “Everything is mismatched, that was the charm because we didn’t want everything to be matched and boring,” says Shivani. “We didn’t create 2D and 3D drawings and plan everything out perfectly. It came together step by step and that is why I really enjoyed it because it felt like doing my own home. The only thing we planned correctly was the wall colours.”

It is rare these days to find a contemporary designer embrace the strong personality of older Indian furniture and objects. It’s not an easy task, and certainly difficult to fit in older pieces, like asking your army-man uncle to come stay with you. The regimen and discipline of older furniture can be on the outs with a young person’s lifestyle. Yet, Dogra manages to marry different time periods, furniture and influences perfectly. In Anasuya’s project, Shivani’s design is light-handed, creating a modern, intelligent, elegant space. The home speaks of both client and designer. “I haven’t consciously sought out a style,” she says. “I do believe, however, that the consistent element through all my projects has been authenticity. I’ve stayed true to the project, the context, the architecture, the client, and the client’s needs. I like well-done things; natural textures, metal, wood, lime plaster, reclaimed teak. My work is a call to elegance, things well done and crafted by hand—quality. Quality means soul,” says Shivani. The authenticity is evident in Anasuya and Newley’s former home. It has a certain reticence; it isn’t trying to achieve any sort of definition or acknowledgement. The space just seems like a great place for a house-proud couple. Easy to describe, but hard to do. Newley Purnell and Anasuya Sanyal now live in Hong Kong, where Newley is with the Wall Street Journal newspaper. The artwork on the wall is a fragment of an old trellis that was framed. The door leads to the entryway.

The Indian-print wallpaper by iconic fashion designer Sabyasachi Mukherjee for Nilaya, by Asian Paints, set the tone for the decor in the rest of the house. The only furniture in this entryway is an old church pew.

The niches in the wall were painted white and dressed with framed botanical prints. The bedroom had an arresting salmon-colour wall. The wrought iron bed is from the export house Original Bedstead.

All the decor was picked from antique markets and scrap stores. The nook at the window was dressed up to have a place to sit and read.

A view of the living room.

The bedroom in the house thay belonged to Anasuya Sanyal and Newley Purnell. A home interior design for work from home A home for three in the Kerala Modern style interior design