Art and craft are at the heart of architect and interior designer Shonali Mahajan’s 1000-sq.ft. home in Mumbai’s Malabar Hill. On the one hand are large, striking paintings by Sudharshan Shetty and Riyas Komu and on the other there are small wonders and objects of desire such as a black-and-white bone inlay coffee table by House of Things and ceramic playthings by Claymen. Craftsmanship is celebrated with pieces from Heirloom Naga and Jaipur Rugs.

Throughout the two-bedroom home, Shonali, who runs design firm Studio Wodehouse, also showcases the work of  her contemporaries—Josmo Studio has outfitted the guest bedroom with a handsome solid wood desk and bed with a leather headrest while a three-tiered bookshelf by SĀR Studio makes a statement in the living room.

The home she shares with her husband, like many others she’s worked on this past year, was entirely renovated in the thick of the pandemic. She gives us a tour of her elegant home, taking us through some of her favourite nooks while also sharing some easy hacks to make the most of a rental apartment. Edited excerpts from an interview:

Art and craft are at the heart of architect and interior designer Shonali Mahajan’s 1000-sq.ft. home in Mumbai’s Malabar Hill. On one hand are large, striking paintings by Sudharshan Shetty and Riyas Komu and on the other, there are small wonders and objects of desire such as a black-and-white bone inlay coffee table by House of Things and ceramic playthings by Claymen. Throughout the two-bedroom home, Shonali, who runs design firm Studio Wodehouse, also showcases the work of her contemporaries – Josmo Studio who have outfitted the guest bedroom with a handsome solid wood desk and bed with a leather headrest while a three-tiered bookshelf by SĀR Studio making a statement in the living room. Overall, this house has an artsy design with crafts donning every aspect.

Beautiful Homes: What was the starting point of the design process?
Shonali Mahajan: This was the first apartment my husband and I saw when we started apartment hunting in October 2020. When we first entered this house, I hated it—the way it was planned, the furniture and the colours. But we came around to it for two reasons. The first was that we really liked the building and this location in Malabar Hill is hard to beat. The other is that each room in the house has huge windows. One entire wall in each room is covered with just windows and that is so rare in Bombay.

We didn’t have to invest too much because the house has solid bones—they just needed a good clean and fresh paint. We also inherited the cherry wood flooring. Since I wasn’t starting with a blank slate, I began to fill the house with a lot of furniture and art I already had. Then I moved on to filling the gaps with new things that I needed to define certain spaces or to make them more dramatic. I wanted to make the home a contemporary, cool and young space. Having said that, I should point out that I didn’t approach my home with the science of an interior design project. It came together organically with comfort at the heart of it.

BH: How did your repurposed furniture, art and objects guide the design for the house?
SM: The dining table is actually the conference table from my office—I brought it home when the pandemic hit and I had to move stuff. It is a take on the carpenters’ workbench or drafting table and it holds such a special place because I am an architect and interior designer. The ribbed, rust-coloured sofa that’s made its way into the house is also a prototype that I never sold. I reupholstered another sofa for the living room in a textured, white fabric with nano-tech coating to avoid stains. We use an old Parsi wooden cabinet and a black, mid-century trolley by Chiki Doshi of Mahendra Doshi in the bar area.

The doors in the house were covered in an ugly laminate and because the house is a rental, I needed a cheap hack so I’ve covered them in a matte black film by 3M. In this way, the doors Doors have been covered in a matte black film by 3M, an inexpensive alternate to painting them. The dining table in the living room is modelled after a carpenter’s workbench and the ribbed, rust sofa is a prototype by Shonali. An old Parsi cabinet and a black trolley by Chiki Doshi make up the living room bar.

also made way for the colour palette I wanted for the house—that’s black, white, rust and ochres. I’ve added pops of print and patterns in the same colours with tribal elements and rough, earthy textures like jute.

BH: How did you pick art for the home?
SM: I love art and antiques and fortunately in our family we have quite a bit of both. In the guest bedroom, there is a Sudharshan Shetty which came from my husband’s office. During the lockdown, my husband and I spent a lot of time in the room that housed this painting so when we moved in together this was one of the first pieces that came home with us.

Throughout the house, there are black-and-white photographs of New Empire Cinema by my mother-in-law Maxie Cooper. They are an ode to her father’s cinema career as the family used to own a few cinemas across the country.

In the living room, there is a large portrait by Riyas Komu. This beautiful painting was in my mother-in-law’s store room and when I took its measurements, I realised it fits perfectly under the beam in the living room. It’s become a running joke now because right next to it, is the white sofa on which we take all our covid tests with our noses up in the air. The living room windows don’t have curtains but fabric from Iqrup+Ritz is used to create mock drapes to cover up oddly shaped windows. The abstract mid-century modern pattern features some of Shonali’s favourite colours. An oversized portrait by Riyas Komu is a focal point in the living room. Shonali jokes that, fittingly, the seating next to the painting is where she and her husband have endured several nasal swabs for COVID tests during the pandemic.

BH: The house is uniquely lit, can you tell us about it?
SM: I have always loved filtered, soft light in a home. As an interior designer, you deal with so much noise and clutter on a daily basis that when you come home, you just want to escape and retreat to a space where you can let it all go. So, I haven’t used any ceiling lights or spotlights in the house except for the one light above the dining table. I didn’t want the space to be over-lit at night instead I wanted a moody, candle-lit setting so all of the light we need is from the use of table and floor lamps. These are more than enough for us in the evenings and during the day, we have an abundance of natural light anyway.

BH: What is your favourite part of the house and the part where you spend the most amount of time?
SM: Our living room setting is very relaxed, very comfortable, warm and inviting. At the heart of it is a super comfortable white sofa which has a nano-tech coating so I don’t have to worry about spillage. When we have friends over, they know they can relax and put their feet up. We’ve placed both sofas by the window and broken it up in two seating areas to maximise the living room space. Usually, one would place the sofas closer together with a coffee table in the centre but because we’ve pushed the sofas to the sides, we’ve created spaces in between where people can even just sit on the floor and chat. 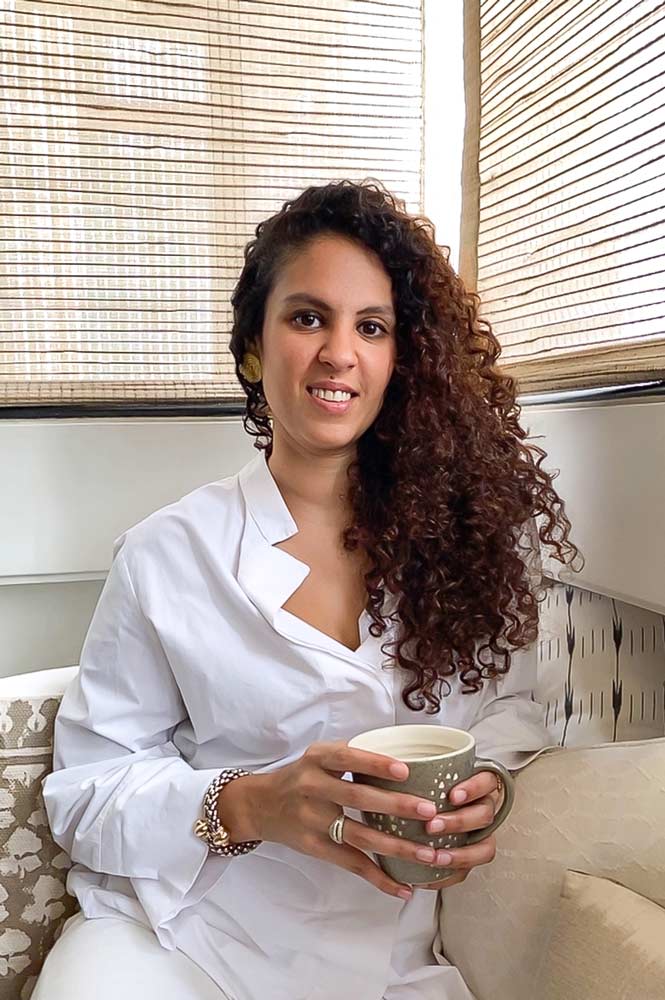 Every room in Shonali Mahajan’s home has large windows that make up one of the four walls. Taking advantage of the ample natural light, there are no ceiling lights in the house. Only table and floor lamps are used to create a moody atmosphere in the evenings.

An oversized portrait by Riyas Komu is a focal point in the living room. Shonali jokes that, fittingly, the seating next to the painting is where she and her husband have endured several nasal swabs for COVID tests during the pandemic.

A hexagon coffee table in black-and-white bone inlay sets the tone for the living room. Playful sculptures by Aman Khanna of Claymen are a housewarming present. The black-and-white bed linen is by West Elm and Chunilal Mulchand & Co. Cushion covers are by Heirloom Naga. All the furniture in the guest bedroom is by Josmo Studio.

A large Sudharshan Shetty painting is housed in the guest bedroom. The colour-blocked rug is by Jaipur rugs. Designer Anjali Mody of Josmo Studio is a close friend who helped Shonali pick out a solid wood desk for the guest bedroom. Bookshelves and other small storage solutions are Ikea. From the BHS album: A weekend home designed for a large joint family MDF wood vs Plywood: which material is best for your home furniture

Have you ever come across the various types of material such as Particleboard, MDF and BWP Plywood? While every material has its advantages, each varies from price to quality to durability. Let’s find out more! Co-founder of A Design Co, Gowri Adappa’s home in Chennai is a perfect reflection of her eclectic design sensibility

This rented Mumbai flat is a study in subtle elegance

In one of the tallest skyscrapers, this apartment boasts of stunning views of the Maximum City with a minimalistic design approach