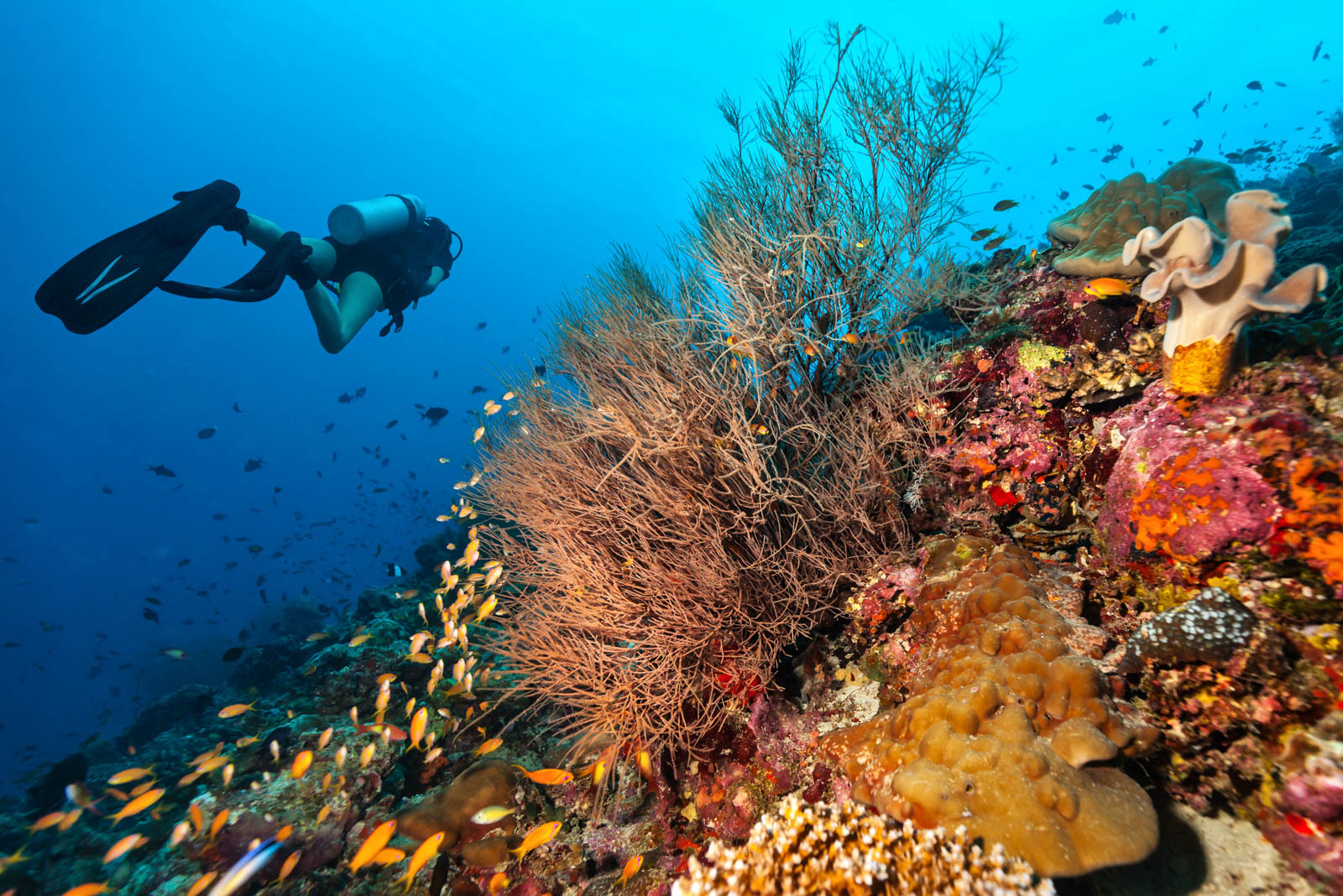 Over drinks one night with friends, chef Pablo Naranjo Agular of Mumbai’s Le 15 Café, was lured into talking about diving with some seasoned dive enthusiasts and curious first-timers. By the time he woke up the next morning, “I was part of a Whatsapp group about an upcoming trip to Havelock,” he laughs. Talk to any dive enthusiasts and you will see that’s how serious they are about their passion. The lure of diving may be different for different thrill seekers, but what’s common to all is the draw of seeing diverse underwater marine life and the incomparable sense of calm. Now, with more people getting wetsuited for a trip to this underworld kingdom, it’s no surprise that diving is quickly becoming a mainstream kind of pursuit.

Agular decided to go with the flow: the first step was to complete his training at a swimming pool in the city before preparing to do the rest of the training on the trip. Once underwater in the Andamans, he was immersed in a world that he still finds difficult to explain in words. “Awesome”, “spectacular” and “really insane” are the adjectives the Colombian chef comes up with while describing his first dive. Being surrounded by the infinite blue and watching the beauty of the marine life up close gave him an itch to keep going. Now he has an open water diving certification and has also armed himself with a GoPro camera so that he can capture the underwater on his next diving trip. Govind Kumar recently quit his career as an ad filmmaker to set up the Wild Blue Dive Centre in Thoothukudi (Tuticorin) in Tamil Nadu. Here Kumar is underwater in the Andamans.

Life in the Deep End
A world of silence, hidden in the depths of oceans and inhabited by life that’s generally seen in pictures or on film; as Agular found, that’s the world that opens itself up to discovery if you are willing to open yourself up to the experience and dive into oceanic depths to appreciate the wonders of nature. It is no wonder that Pankil Shah describes his time spent on the ground as, “a surface interval” while he waits to go underwater. Since he started diving in 2013, he’s glimpsed humpback whales, whale sharks, nurse sharks, manta rays and black-tipped reef sharks. Immersed in the deep blue, Shah, who’s best known as one-third of the trio behind Mumbai’s well-known F&B enterprise Neighborhood Hospitality, is one of a growing tribe of vacationers who is looking forward to time spent underwater on dive trips that have seen him travel to the most pristine waters of Asia and Africa and live on boats.

For a lot of divers, their first time underwater transforms them, as happened with fashion designer Kresha Bajaj. Her first dive was during her honeymoon three years ago; since then she has “logged in 99 dives”. Delhi-based Diya Roopchand Kaul, co-founder of a fitness studio called Studio 60, was also first introduced to diving by her husband in the Andamans, and has accumulated 80 trips underwater by now.

Such is the calling for this passion, it has also been turned into a full-time pursuit by Govind Kumar and Shernaz Ranji; they have all but given up on traditional careers to make diving their source of income. Former ad filmmaker Kumar recently set up the Wild Blue Dive Centre in Thoothukudi (Tuticorin) in Tamil Nadu, while Ranji has ScubaLov, a dive shop in Havelock Island in the Andamans. She also organises trips through her company ScubaTrip. Bajaj, on the other hand, finds inspiration for her work on her dive trips. “The colours and textures of coral and marine life make me think of luminous and translucent fabrics, textures and embroidery patterns.” Laxmanpur beach, Neil Island in Adamans is a popular spot for divers to relax.

The large number of diving enthusiasts means equally varied recommendations for the diving destinations to head into. While Kaul has been to the Maldives twice for liveaboards—spending a week on a boat for daily diving—Shah reels off a list of locations for you to encounter the underwater world: “Krabi, Koh Tao [both in Thaliand], Boracay [the Philippines], Langkawi [in Malaysia], Maldives and more.” Each destination offers unique underwater scapes. Some divers choose their next location based on the kind of wildlife they’re hoping to see—whether that is diving with humpback whales (and their calves) off the coast of Mozambique or manta rays in the Maldives.

While there are those, like Kaul, who are on board the liveaboards experience, others choose to base themselves by the sea for regular dives into the water. Now, Bajaj is looking forward to diving off the coast of Komodo Island in Indonesia, which is also on the list for Ranji. In fact, Komodo now is the number one spot on the to-do list of most divers. Within Indonesia, Raja Ampat is another popular destination. Kumar, who has logged over 1,000 dives, explains, “It is especially famous for its rich [colourful] coral reefs—I’ve never seen so much colour underwater.” For him, Micronesia—and island nation in the western Pacific Ocean and the island country of Papua New Guinea (in the southwestern Pacific) are on his list, as he seeks out, “ocean life that is undisturbed”. Fashion designer Kresha Bajaj has translated the colours and textures of coral and marine life into embroidery patterns on luminous fabrics.

As for your first dive into adventure, Havelock, it seems, is where you should take the plunge - that’s where most people, including the veterans, started out before moving on to varied destinations all over the world. Jharna Thakkar and Rohan Fernandes gave up fast-paced city life when they moved from Mumbai to Uran—and discovered the joys of old-school agriculture and clean living at 574, Fernandes Wadi.