At no other time have we paid as much attention to our home environment as we have since the start of this pandemic, which has confined us to our homes. For many people, it has accelerated what was already becoming clear before this crisis started, the need to make choices that can reduce our personal impact on the climate.

Your home is polluting the environment
While we are aware of the carbon footprint that results from modern lifestyle, from travel to the food we eat and the purchases we make, what is often overlooked is the role of homes in polluting the environment. According to the United Nations Environment Programme, buildings account for nearly 40 per cent of annual global emissions. And residential buildings produce a large part of those emissions. The current crisis which has come on top of climate catastrophes and extreme weather events in different parts of India and the world has shown that we are running out of time.

Climate responsive housing can seem like a complex and overwhelming concept for most people. Yet, it can be fundamental and easy to adapt and is closely aligned with nature and tradition. With advancements in technology, it has also become more affordable.

No air conditioning? Yes it’s possible
When OC Thomas, an entrepreneur who runs resorts in Kerala had to build his home eight years ago for his family of five, his wife and three children, he was ahead of his neighbours in thinking of climate repercussions. His home is located near the backwaters on the outskirts of Kochi. He was aware of rising ocean levels that could impact the backwaters along with heavy rains that have led to flooding in the city. The house has been built at a height of 2 metres from the ground, raised on concrete slabs. “We wanted a house that would last us for two generations. We wanted it to be compact and easy to maintain,” he says.

In a region like Kerala with it mostly moderate climate, it is

Entry court to the home designed by Tony Joseph, built with locally-sourced natural materials and plants and trees that add to the cooling.

possible to cut down on air conditioning as Thomas has done in his home. Only the bedrooms have air conditioning, while the common living areas depend on natural air ventilation through high ceilings, large windows and open courtyards. The flooring in the house is of natural material. Tiles have been used sparingly in bathrooms and were sourced from an old monastery. There are provisions for water harvesting and solar panels.

His home was designed by architect Tony Joseph who emphasised locally-sourced natural materials like white cement and coconut timber, to cut down the environment cost. The open courtyards and use of natural materials are inspired by traditional architecture. “We can learn from traditional homes but we need to adapt to our times. There was great utilisation of open spaces in those, but the rooms were always dark and damp and used mostly for storage,” says Joseph.

In Joseph’s own home in Kozhikode, there are hardly any walls to reduce closed space and the indoor and outdoor spaces are inter-connected. The wood that he used for the furniture, as well as the stairs, was recycled from an old home that was being demolished. It has a lived-in texture that carries memories of the past. “The awareness to build climate-sensitive houses is slowly seeping in, but not fast enough,” he says. The biggest mistake people make is they create a problem and then try to solve it, build a home and later try to mitigate its climate impact, instead of planning it in advance.

Shadow House in Alibaug by Samira Rathod Design Atelier. Inspired by a traditional South Indian house, it has a central courtyard to keep it cool.

Climate responsive housing can be a choice even in cities
Most parts of southern and western India have a tropical climate and housing can be aligned closely with it. “People used to think of sustainability in architecture as a buzzword, as a way to sell an idea, but now we know it is imperative,” says Mumbai-based architect Samira Rathod, who believes architecture has to respond to the climate crisis.

Even in a congested city like Mumbai, it is possible to rethink our living realm, she says. “We have to design in a way that all material can be dismantled and recycled.” She is currently designing a building where waste material like debris has been used for walls. There has been a resistance to using eco-friendly materials like mud, exposed concrete and fly ash brick as they are not considered aesthetic, but they need to be accepted and that

will require a mindset change, she says. The use of water needs to be optimised, it has to be recharged and harvested in all residential buildings.

Build only as much as you need and keep it simple, is what Soumitro Ghosh of Mathew and Ghosh Architects from Bangalore has to say. He recommends some practical and necessary ideas, “Cross ventilation, overhangs, capturing wind direction and openings in and out, landscape as a psychologically pleasing and cooling tool, and insulation of the roofs and walls exposed to extreme sun.”

Things to remember when building in tropical climate:
-        Build at a height from the ground if next to a water body prone to flooding

-        Use locally available natural materials like cement and mud and avoid marble, granite, glass and tiles as far as possible

-        Make provision for reusing rainwater and recharging the groundwater table

-        Try to use waste and recycled material, it can be made to appear aesthetic The house in Kerala is designed by Tony Joseph. The dining space has wide windows for ventilation and gives a view of the distant mountains.

The living room in this design by Tony Joseph has an outdoor area that extends from the room, adds to the ventilation and green cover.

The interior of a house in Bangalore designed by Mathew and Ghosh Architects. It has a captive wall that excludes heat and deep light striations on the white walls to scoop in breeze from the verandah and garden court.

The various parts of Camera House connected through interstitial spaces like the verandah and bridges. Camera House in Alibaug by Samira Rathod Design Atelier. The home is designed for a photographer and takes formal inspiration from parts of a camera. The walls are made with prefabricated hume pipes.

On Le Corbusier’s 133rd birthday, everything we learned from the visionary architect that is followed till date 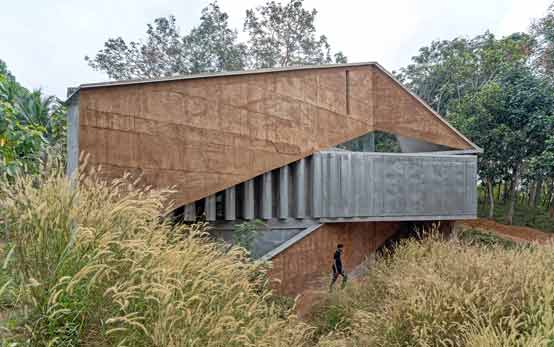