These days, kitchens are no longer functional spaces used solely for cooking. It has become a place to entertain, study, and work in as well as prepare meals. To ensure that the kitchen meets your daily needs and activities requires more than simply selecting cute cabinets and new appliances. It has to be a safe and accessible space that allows for ease of movement. Kitchen floor plans can be U-shaped, L-Shaped or Galley and depending on the open space available, they can include islands.

Indian kitchens, especially in apartments tend to be quite small. An L-shaped layout is a good idea for small and medium sized spaces and when designed well, offers ample countertop space. It also offers enough floor space to incorporate a kitchen island, which is an extremely helpful addition for food preparation and added storage.

Here are some common questions answered that will provide some understanding on how to design the perfect L-shaped kitchen for your home.

To achieve an organic L-shaped design, the kitchen must be designed from the corner where two walls meet. With the right dimensions, it offers a sensible work triangle. It is a great idea for apartments that have less floor space as it optimizes the use of floor space, provides ample counter space and helps streamline workflow.

2.    What are the Pros of modular kitchen design L shape? Since the L shaped kitchen has a two-wall layout, there is ample space for appliances which can be laid out at regular intervals and need not be cramped together. This separation of the appliances provides multiple work zones, and adequate space for food preparation.

B.    Great for an open plan concept

If your home is based on an open plan concept where rooms flow into one another, L shaped kitchen design ideas are a great option as its shape inherently lends itself to open concept design.

For instance, in a larger space, the L shape can run along two walls and a stand-alone narrow island can provide a division between the kitchen and the living spaces while also serving as a breakfast or work space. On the other hand, in a long narrow area, the living spaces can end in an L shaped kitchen layout making the space appear larger and airier.

An L-shaped kitchen is a highly desired element as part of an open plan concept interior design as it is ergonomically designed and highly functional. Having an L shaped kitchen layout can potentially increase the value of your home.

3.    How would a modern kitchen design L shape enhance your lifestyle?

These days people want their homes to not only look good but be highly functional as well and this goes double for the kitchen. Kitchens are spaces that are used to not only cook food but to eat in, to entertain and may even be used for work and study.

A great way to make an L shaped kitchen be optimally functional is by splitting it into work zones. For instance, if the shorter leg of the L is used for washing up, the longer leg can be used for cooking and meal prep. A stand-alone island is a great idea for entertainment and can double up as a breakfast table or workspace. 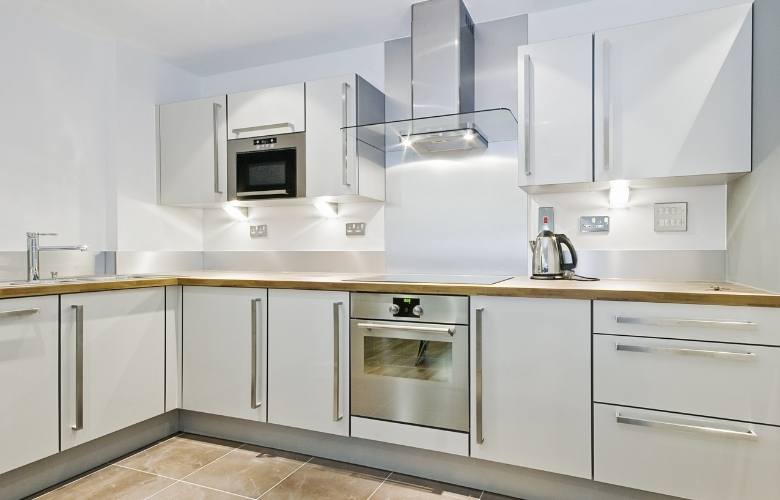 4.    What are the dimensions of an L shaped kitchen design?

An L shaped kitchen uses two adjacent walls to create an L shaped countertop. The two Ls can be in multiple variations of lengths and depths depending on the space available. There should be a minimum clearance aisle of 3’ to 6' in front of the L shape layout, with widths ranging from 4’ to 6’. The linear lengths can range from 8’ to 13’ and shorter lengths between 3’ to 9’. The overall area of the space will vary depending on the size of the kitchen space.

5.    How many cooks can fit in an L shape kitchen interior design?

An L shaped kitchen can accommodate two cooks at a time. The open layout provides floor space and counterspace for two people to work on both legs of the kitchen layout without getting in each other’s way.

6.    How to determine flow of traffic in an L type kitchen design?

Your method of cooking, the number of members in your family, and whether you employ a cook are all factors that will help determine the flow of traffic in your L shaped kitchen. The legs of the L need to be laid to accommodate these factors.

Once the dimensions and functions have been sorted out, you can think of other components of the kitchen, like the optimal work triangle, where the appliances need to be placed, and the design of the cabinetry to come up with a design that best suits your space.

What are the tips for enhancing L-Shaped Kitchens?

A modern kitchen needs to be functional but it also needs to look pleasing in appearance. Selecting the right materials is very important to enhance your kitchen décor.

Here is a list of elements that go into enhancing kitchen décor:

Whether it is tiles, marble or wooden flooring, the right flooring can make a great first impression.

From wood, to laminate to acrylic, there is a wide range of bases

and veneers for L shape kitchen cabinets to choose from to bring together your kitchen décor in a harmonious way.

There are myriad options to accessorize your kitchen to make it a more convenient and clutter free space, for instance, a cutlery organiser, partitions for forks, spoons, and knives, tall units, corner solutions, shelves, under sink units and bottle pull outs are all great additions.

These days kitchen appliances have become a form of kitchen décor by themselves with their sophisticated and streamlined designs.

From seating around the island to kitschy stand-alone shelves, there are many kinds of fun, functional furniture that you can add to enhance your kitchen décor.

From under the cabinet strip light, to hanging lights over the island to cabinet lighting, lighting can add a whole new depth to the kitchen design.

How can Beautiful Homes help you create the perfect L Shaped Modular Kitchen?

At Beautiful Homes, we create beautiful interiors with a client-driven approach focused on collaboration, innovation and custom details. Our design team finds sophisticated solutions to fit each client’s aesthetic and functional goals. We use the three fundamental elements of design – light, colour, and space planning – to create beautiful and comfortable spaces that you are going to love. We get things rolling by setting up a meeting with our Customer Experience Specialist and a Sleek Kitchen designer. After understanding your needs and your cooking, storage and structural requirements, we propose modular kitchen design options that will help the smooth functioning of your space.

We will keep you updated right through the project and once installed our Customer Experience Specialist will give you a walk-through of your kitchen. One of the advantages of a Beautiful Homes Sleek Kitchen is that it comes with a 10-year warranty and a full year of free maintenance, so you can enjoy your cooking while we take care of your modular kitchen’s maintenance and durability. Partitions for your open kitchen

Acrylic vs PVC Laminates: Which option is better for you?

When choosing the best finish for your modular kitchen, it’s easy to get hung up on questions like, “which one is better, PVC or Acrylic laminate?” So let’s explore how the two finishes differ and what might make one choice the right option for you! Here are some modular kitchen-related commonly answered queries, to help you make the right choice