With its understated grandeur and elegance, this home envelopes you in its warmth and positivity. Spread over a total area of 4,000 square feet, this south Delhi residence of Amrita Guha and her husband, Shoumik evokes an aesthetic sensibility that’s Indian in its approach but contemporary in its execution. The couple, their two children and Guha’s mother-in-law occupy one of the duplexes of this four-storey residence (with a basement and terrace), while her brother-in-law and his family live in the other. For the interior designer and co-founder of Untitled Design Consultants, along with Joya Nandurdikar, this home “is reflective of the philosophy of her 19-year-old architecture and interior design studio”.

IN WITH THE NEW
This is a home that is a fitting homage to its past glory; the original structure, over 40 years old, was an “architectural marvel in its own right”. According to Guha, New Delhi’s Sumit Ghosh, one of India’s leading architects, had conceived it as a powerful structure in red brick and concrete. For a residence that was already so striking, “it was an emotional journey to raze the structure”, confesses Guha. Why, then, the decision to rebuild it? “Each home,” she explains, “has a time span of roughly 20-25 years. Our home had outlived its time”. The growing number of family members, the need to create more functional areas in the given space, the changing times—these considerations allowed all the family members to give their consent to move forward with the old while embracing the new.

The journey of creating this home gave Guha an opportunity to become “my own client”—a responsibility that came with its own challenges. So, even though she could experiment to her heart’s content, she needed to be aware that every decision she took was on behalf of her entire family. And that’s where Nandurdikar, as Guha explains, became her sounding board, “as always”. It also gave the designers a chance to showcase Indian heritage and local craftsmanship while moving forward with an “environmentally friendly, sustainable approach”, the cornerstones of their practice. 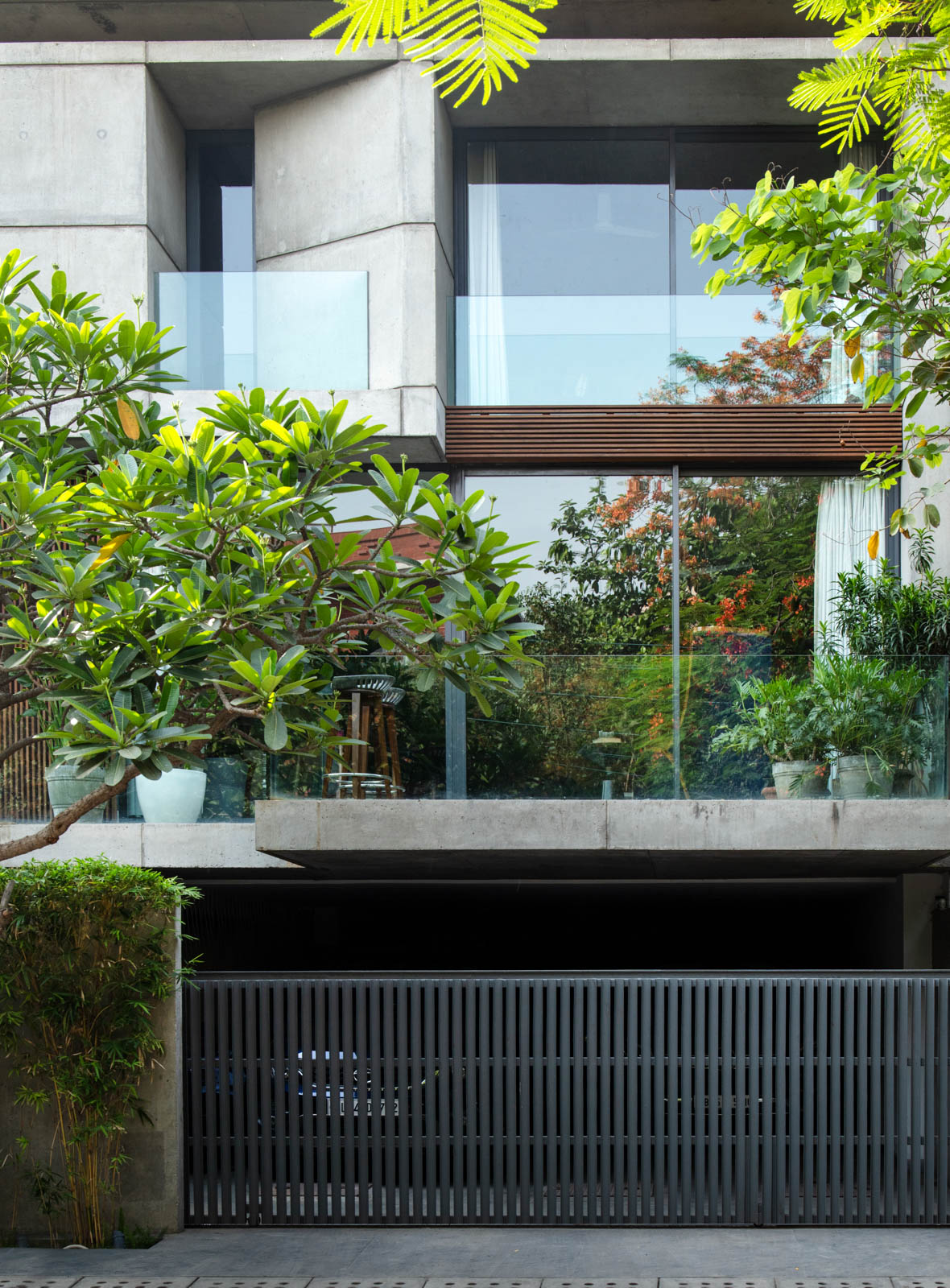 A front view of the Guha residence, which is spread over 4,000 square feet. The tall glass windows and doors, and the exposed concrete combined with fluted membranes of wood make for a striking sight.

their homes but the sheer elegance with which it is presented in Guha’s home is worth noting. Ditto the granite wall in the dining area, which was carefully restored with leftover stone found in quarries. In the adjacent living room, the unique chandelier (inspired from the community cooking utensils of Kerala’s Palakkad region) sheds a golden light on the exposed concrete ceiling. A blue cabinet is just another example of how this home re-imagines and reinvents traditional craftsmanship. “We do a lot of R&D; in this cabinet, the texture was achieved by melting brass and then patinating the sheet. Later, the patination was taken off from some areas for the colour to be achieved,” says Guha. Artisans from Puducherry and Gujarat were specially brought in to apply their traditional expertise to the spaces. This, of course, came with its own set of challenges. “The lime-wash technique,” explain the designers, “was particularly tricky in that our team from Pondicherry was used to river sand. What was available in Delhi, however, came with a lot of impurities.” It took a lot of “curing” and trial and error to get it right. Intent on getting everything just right, when the team hired for the terrazzo flooring didn’t do the job well, Guha tore down the three bedrooms completely and restarted the process with a new team.

For us, using any material to a potential that has not been tapped becomes our favourite. For example, the stone wall in the dining area was ‘waste’ but we realised a new way of utilising it.

In the 20-month journey towards rebuilding this home, it eventually became, as Guha describes, “a storyline in continuity”. Not breaking away from its past narrative, this home is rooted in the present in a bid to create timeless memories for the future.

Style: An innate Indianness that’s contemporary and not traditional; chic yet with a subtle glamour and a holistic, sustainable approach.

Favourite materials: “For us, using any material to a potential that has not been tapped becomes our favourite. For example, the stone wall in the dining area was ‘waste’ but we realised a new way of utilising it.” The large painting on the left is a Gond artwork Guha collected a few years ago; next to it, the portrait is by Bimal Kundu and the set of two artworks next to that are by G Raman; the artwork depicting the bird (above Kundu’s painting) is by artist Satyajit. The antique sofa, typifying Parsi furniture, has been reinterpreted in a champagne-coloured leafing technique. The wooden chair and coffee table with the lapis lazuli tabletop and brass legs are by Untitled Design; on the side table next to the sofa is a stone planter from Good Earth. The granite wall in the dining area illustrates the intelligent reuse of the granite waste that is found in quarries and factories. The rug in the master bedroom is from Dilli Haat; the lighting and furniture is by Untitled Design. The coffee table is what is traditionally used by tribes in Nagaland as a rice grinder.

Favourite crafts: Pietra dura or parchinkari, the exquisite inlay technique of using highly polished and coloured stones to create images; Gond art from Madhya Pradesh and its other versions in Andhra Pradesh, Maharashtra, Chhattisgarh and Odisha; koftgari from Rajasthan, which is an ornamentation technique used for weaponry; pichhwai paintings also from Rajasthan that traditionally use the scenes of Krishna to adorn the Nathdwara temple walls; patachitra or cloth-based scroll painting from Odisha that offers visual depictions of mythological and folklore narratives.”

Custom-made furniture: Most of the furniture is bespoke but the set of sholar tables are an example of how Untitled Design promotes the revival of Indian handicrafts. Sholar kaaj is integral to eastern India and the Deccan plateau region.
Inherited pieces: In the living room, carefully framed on one of the walls, is Guha’s grandmother’s tapestry, which is easily six decades old.
Favourite space: Guha loves the lounge area on the first floor where the entire family congregates to spend time together. 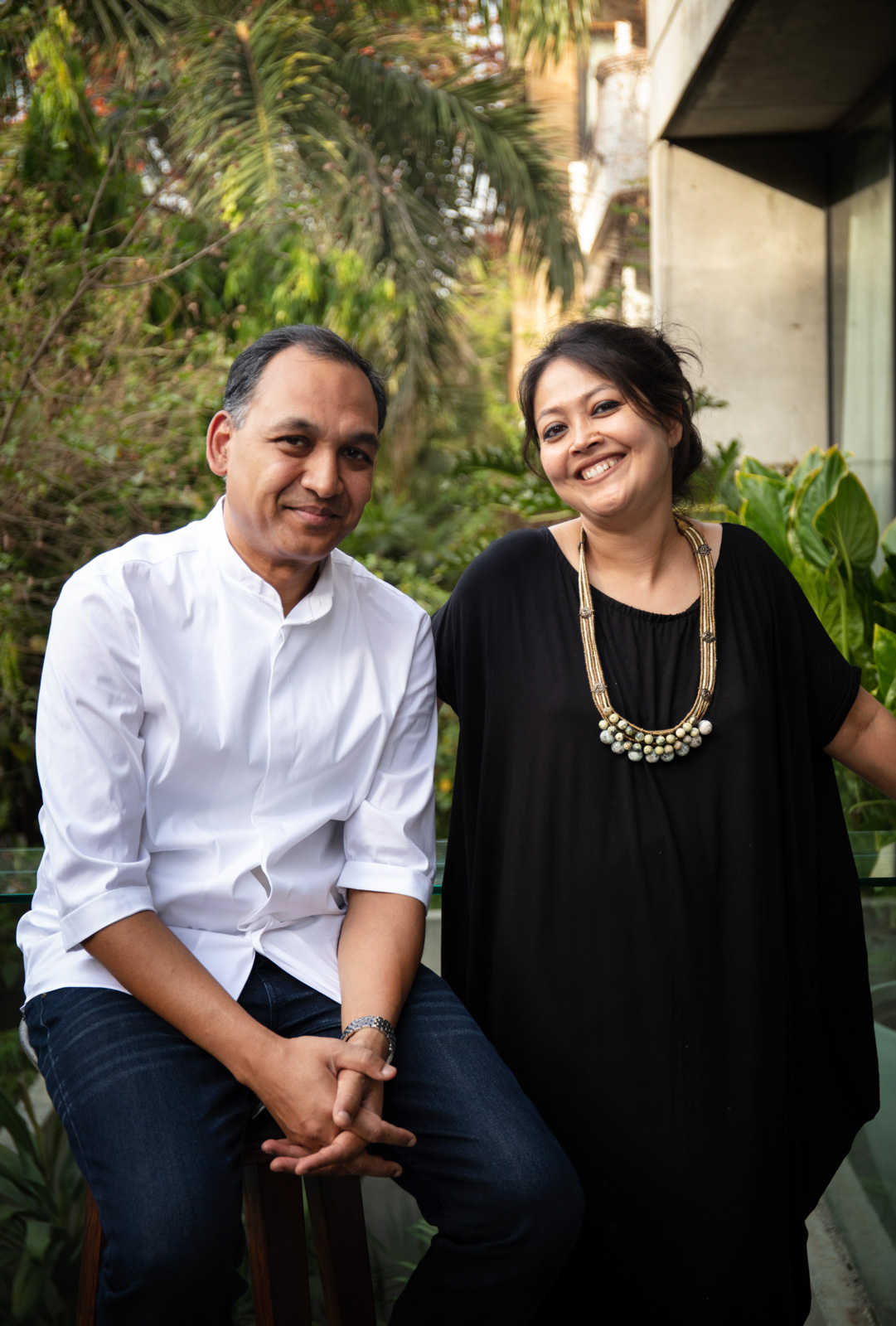 Shoumik and Amrita Guha in the balcony of their home. 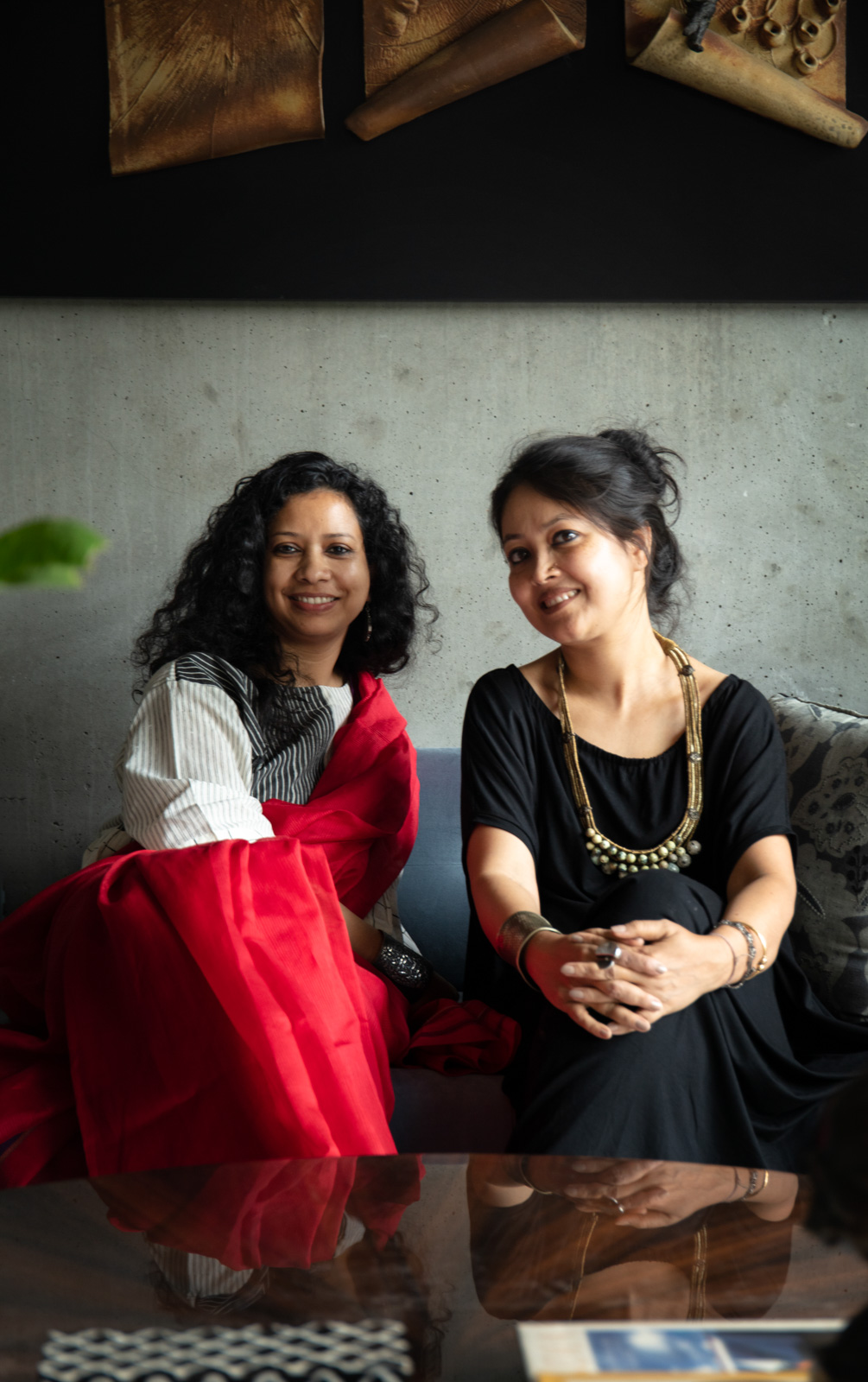 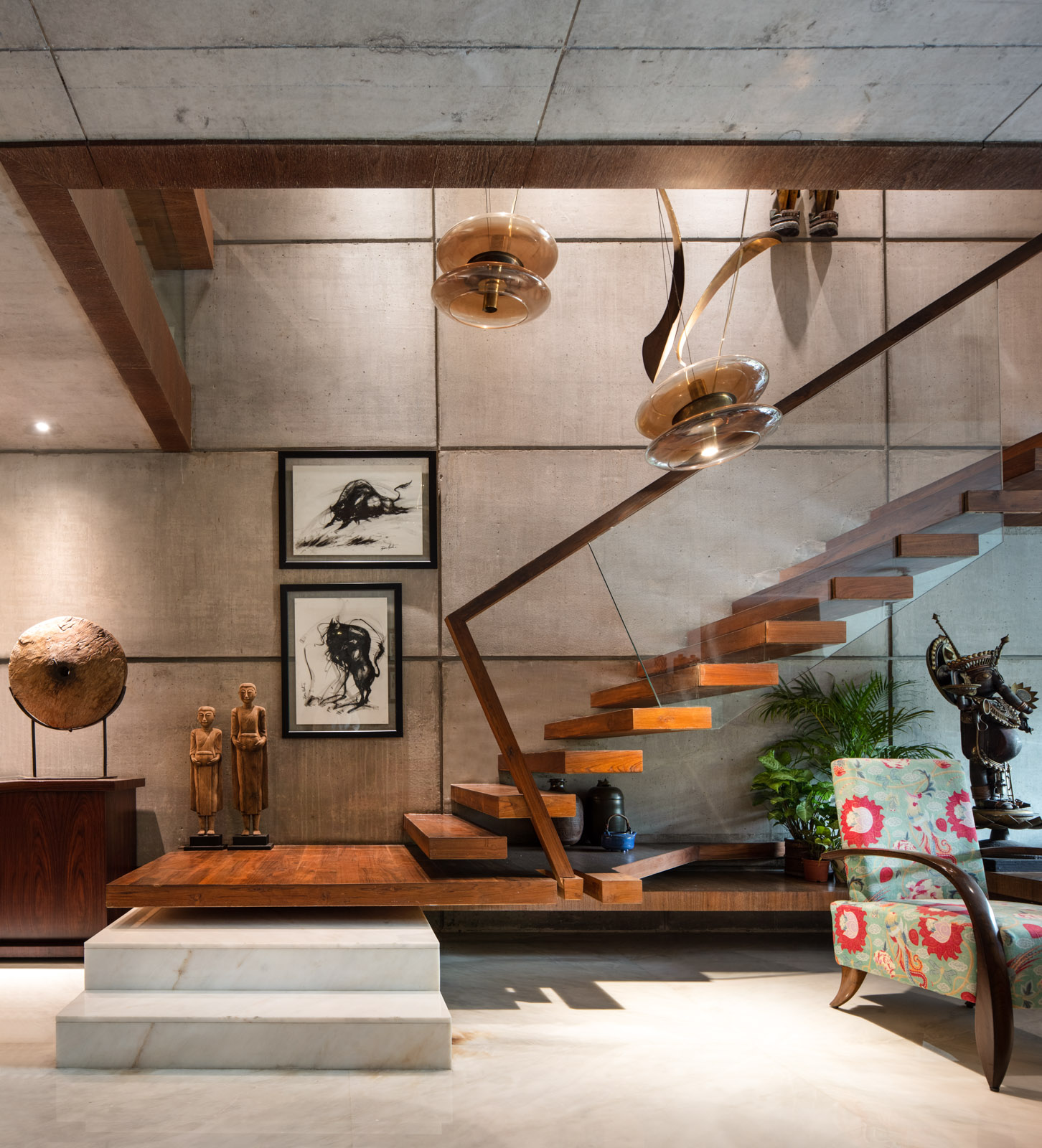 The staircase has been made from recycled wood reclaimed from the original structure. The armchairs have been upholstered in fabric from Good Earth, New Delhi, while the metallic Ganesh sculpture near the staircase is from Kolkata. On the sideboard, an old wooden chakki has been arranged on a pedestal. Part of the spacious living room of interior designer Amrita Guha’s New Delhi home; the application of exposed concrete on the walls and the ceiling was done by artisans from Gujarat. The impressive Dashavatar (the 10 incarnations of Vishnu) wall art in ceramic was done by an artist especially commissioned by Guha. The metallic sculpture of a mythological figure was picked up from Bali. The furniture has been custom-made furniture by Untitled Design, including the high-back chair, sofa, the sholar table and the chandelier, inspired by utensils used in south India. The lounging area has an impressive installation created by Untitled Design in collaboration with Klove, the New Delhi-based lighting design studio. For Guha, the inspiration for the metal-and-glass installation came from one of her earlier sketches where she wanted to create forms that represented freedom of thought. The rug is from Dilli Haat while the wall has a set of Madhubani paintings. Artworks by contemporary artist Tapas Maiti line a wall in one of the rooms on the first floor of this house. The liquor cabinet has been converted from an antique, family-owned gramophone unit dating back two generations. The library-cum-study on the first floor has photographs by Prosenjit Ghosh. The wooden ceiling in this section of the house has been reclaimed from the original structure. The bespoke chair and desk are by Untitled Design. Many of the wardrobes in the residence use the Sucupira veneer, a South American hardwood with a character similar to rosewood or teak, which gives a lovely pattern and texture to the surface. The detail on the handle is in solid teak wood. The side table fronting the wardrobe is by Untitled Design Sketches done by Guha’s children when they were younger have been framed and hung in the children’s bedroom, which is on the first floor. The bed, woven-leather headboard and solid-wood bedside table are by Untitled Design. One of the bedrooms on the first floor showcases a set of works by artist Kalam Patua, who has been reviving the 19th-century Kalighat painting style that originated in West Bengal; Guha picked these artworks, from the ‘Babu Culture’ series, from a Kolkata art gallery. A closer view of the cupboards in the bathroom attached to the master bedroom done in solid wood and chatai weave. While the basin shown in this bathroom is from Bali, the bone-inlay mirror, typical of Jodhpur, was picked up from the Rajasthani city on one of Guha’s travels. The under-counter is by noted muralist, artist and installation designer Gopal Namjoshi, who specialises in creating installations using discarded, damaged or broken iron objects.

This brass basin by Untitled Design is a “sculpture in itself”. The idea was to reinterpret a rock that was sliced in half, and the inspiration, traditional Indian metalwork made by craft communities such as the Odisha-based matalsmiths, the Kansaris, and the Pune-based Tambat community, who specialise in copperware. A home in Mumbai close to the airport, large enough to accommodate individual personalities and distinct interests and with that inescapable sense of home. For a couple always on the move—Joseph Radhik and Devika Narain found the ideal apartment to embark on their journey together as newlyweds