Kuttikanam is one of those lovely little places which only those who know it know, if you get my drift. It is located in Kerala’s portion of the Western Ghats, sitting along winding roadways, past waterfalls and within foggy tree cover, a fertile high-altitude mountainous area full of spice gardens and tea plantations in Idukki district. Here, even at 11 am on an October morning, Kerala’s notorious humid-hot-or-just-very-hot climate calms down to cool and gentle.

Rani and John Mathew Neroth's holiday house in Kuttikanam is filled with objects they've been collecting for years.

In the late 18th century the British planted coffee first, then tea along these parts and it quickly gained value for its plantations. The amiable weather also made Kuttikanam a coveted second-home destination within the erstwhile province of Travancore. The royals of Travancore ruled over a swathe of land stretching from the southern tip of India, including Kanyakumari which is part of modern-day Tamil Nadu, till Aroor, further north in Alappuzha district. It was one of the former Kerala kingdoms that ceded to create the modern state of Kerala in 1956.

The Travancore Maharajah embedded a vacation home in Kuttikanam and so did the Regent Maharani Sethu Lakshmi Bayi. (Manu Pillai’s bestselling popular history book, Ivory Throne, provides incredible insight into the lives of this ruling family.) The Regent Maharani's summer palace was built for her younger daughter Indira and was called Indira Mandiram. It was sold after the family relocated to Bangalore and after changing hands was bought by Rani John's father in the 1960s. It then became their family home. Hill House has been created in Rani’s plot on the estate, while another portion is now Misty Mountain Plantation Resort, and a tea factory that makes Misty Mountain tea. 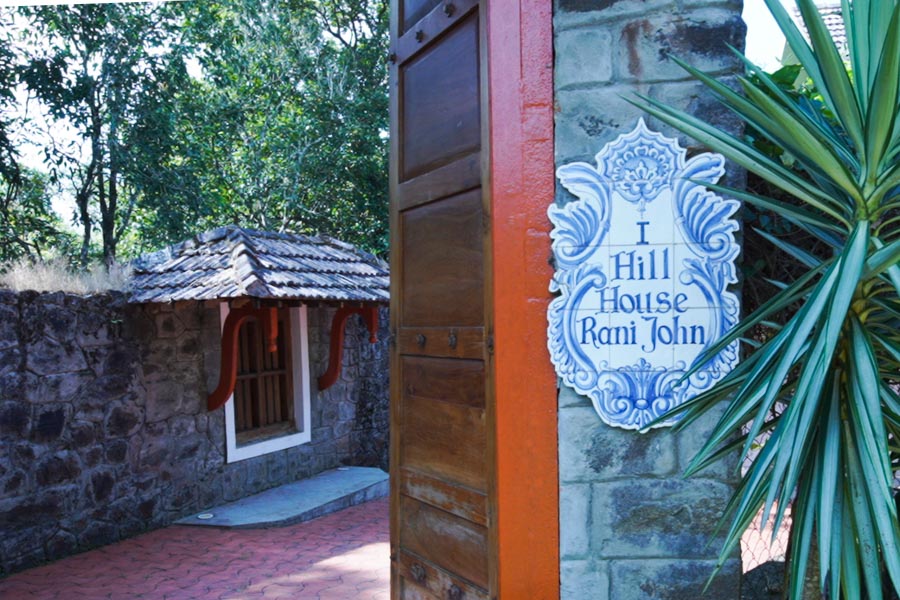 The blue-tile nameplate at the entrance of Hill House was put together with Portuguese tiles called azulejos, which are being recreated in Goa.

There are many ways to create a home. Which modus operandi you adopt just depends on the temperament of the homeowner, and said person’s resources, of course. Rani, 67, and her husband John Mathew Neroth, 71, have accessorised Hill House with personal anecdotes and an itinerant collection of antiques. Homes like these thrive on the backstory of the items that have found their way into them; new and shiny is abrogated in favour of things that have provenance and character. The living room has a fireplace at the centre of the space. On the shelves, there's a collection of glass bottles they’ve accumulated over many years.

Hill House stands for the legacy of their families, fortunes and relationships with the places they’ve come from. And it is also fun. There are quirky groupings of objects all over the place, like their bottle collection, which includes a bottle of wine from the first dinner they had at Hill House more than a decade ago, a 60-year-old bottle of the English tonic wine Wincarnis, and coloured glass bottles picked up from a wedding celebration in New York. Then there’s the sacrilegious pairing of an antique confessional sitting beside the terrace bar. A confessional is an enclosed stall where church priests sit while hearing the confessions of parishioners, so placing that object next to the bar is irony by design.

If Kuttikanam is the physical location of the home, Alappuzha (or Alleppey) is at the heart of it. Most of the objects sitting within Hill House have travelled up to the hills from the old port city, which is known best for waterways, boats and boat races. Rani and John live and work in Alappuzha, the topographical opposite of the hills. Located about three hours south from Kuttikanam, Alappuzha has been the capital of the coir industry since the time an Irish American businessman set up the first coir factory there during the colonial era.

John and his family have been part of that signature business of the city, running NC John and Sons Pvt Ltd., a natural fibre floor coverings company, for 77 years. Alappuzha has many historical charms and as a once-prosperous commercial hub, its stories are intricately connected with Kerala’s trading relationships with the outside world from Roman times. Rani is a member of the Preserve Alleppey Society that’s trying to document what’s left of the old town. “Alappuzha was the commercial hub of Travancore state and a planned city,” she says. “We’re trying to create awareness about the many communities that have lived together here and about the architecture and heritage of this place.”

The couple use the Kuttikanam cottage as a holiday home, frequenting it every month, fashioning and refashioning it constantly.

LIFE OF ITS OWN
Framed by wraparound verandahs, Hill House spreads out over a basement floor and two floors above. The Kochi-based architect Jayanand Kilikar made the drawings of the home, while architect Lucy Philipose designed the functional areas. But then, Rani says, “the home took on a life of its own with John at the helm.” John is the obsessive collector of the two. You can tell the occupants’ preoccupation even before you set foot in the home itself. The vast doors of the gate are warehouse doors from one of Alappuzha’s biggest spice traders, and beside it, an old telephone booth John spied in front of a hospital in his hometown sits in a renewed avatar like a guardhouse.

That evolving décor approach is evident in the knickknacks and The staircase was part of the district head office of the Congress party. John Mathew found out that Indira Gandhi once stood on this stairway but doesn’t have any images of the event.

elements that have found their renaissance here. There’s the staircase on which Indira Gandhi once stood, the excise office gables with the royal seal of the Travancore kings-- “When the younger princess, Princess Gowri Lakshmi Bayi came here, she said they were among the best workmanship of the seals she’d seen,” says Rani. The central living-dining area features a beautiful Goan window with mother-of-pearl inlay, which was bought from a market at their favourite vacation spot, Goa. “Before people used glass in construction, doors were crowned with a mother-of-pearl work, for light to trickle in, and that’s the story of this door,” John says. Then there’s the coffee table, which was fashioned from trolleys that were used in the now-defunct Alappuzha pier. One of the most endearing pieces in the home is a vast wooden frame that was once part of a cow shed; it now hangs as a backdrop of their entertainment room. “We may have to paint the cows in now,” laughs Rani.

Kuttikanam is located in Kerala's portion of the Western Ghats. It is a beautiful mountainous region filled with spice, coffee and tea plantations.

FIT AND FINE
Despite the incongruity of the elements that are sitting together in this house, Rani and John have managed to tie everything together by working with the nature of the objects and the space. For instance, the plot the house sits in was a stone quarry, and instead of levelling it out, as many would have done, John decided to turn it into an underground water storage system. There are many old architectural elements like a staircase, beams, columns, and roof ornaments that have been paired with newer materials. “I learned this from my carpenter,” says John. “In traditional construction in Kerala, the measurements for doors, windows and roofs followed the standard measure of an elbow, or mozham, everything is measured in multiples of a mozham, so even if the source is different, it was easy to fit everything together.” They also adapted to the quality of light in the area, which during the monsoon is quite dark. So, they created rooms with several cutouts in the walls to ensure light came in aplenty, but it’s filtered through flower-shaped stencils, designed by the couple’s daughter-in-law who is an NID graduate.

It has a passing resemblance to metal stencils that have been strung from a light fish net at the entrance of the home to keep away bats that sometimes make the entrance to their home. The couple rescued these shiny metallic objects, used to create patterns for rugs, from a garbage heap. Now they catch the morning light and serve a talismanic duty over this cottage. “If this house has a USP then it’s got to be the salvages,” says Rani. “I suppose we saw a value in many of these objects where no one else did.” And created something priceless. The terrace bar is paired with an old church confessional (not pictured), commonly found in Catholic churches. John managed to combine variant architectural and design elements sourced from many places by following the basic principles of Kerala carpentry. Rani and John Neroth, are based in Alappuzha and use Hill House as their holiday home. The central dining area of the home. In the background there’s an old Goan door embellished with a mother-of-pearl inlay design at the crown. Before glass became a common feature of construction, pearl inlay was used to ensure light came into the room. A metal stencil salvaged from the coir factory in Alappuzha. These stencils were used to create designs for carpets and coir products. You loved these stories as much as we did, and in case you missed them earlier this year now is the best time to tour these homes This warm and colourful home is perfect for hosting and celebrations